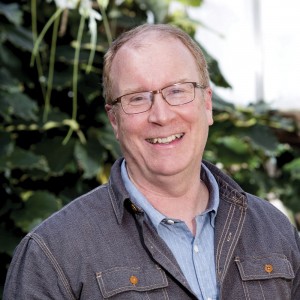 Dr. James (Jim) Leebens-Mack, Professor of Plant Sciences in the Department of Plant Biology at the University of Georgia will be speaking to the Genetics Program on Monday, February 12 at 1:30 pm in the Stanley G. Stephens room, 3503 Thomas Hall.

His talk is titled, “The garden asparagus genome sequence sheds light on the origin and early evolution of sex chromosomes.” This seminar will be hosted by Dr. Qiuyun Jenny Xiang. Continue reading below to learn more about Dr. Leebens-Mack’s research and the abstract of his upcoming talk.

Research:
Dr. Jim Leebens-Mack’s research employs genomic, phylogenetic and experimental analyses to investigate the genetic and ecological processes that influence diversification. Specific interests include the molecular genetics of diversification including speciation; the molecular basis of adaptation; the evolution of genome structure; genomic processes influencing gene family evolution; the evolutionary consequences of species interactions; and the coevolution of genes interacting in regulatory and developmental pathways.

Phylogenomics employs genome-scale sequence data to resolve organismal relationships and investigate gene family evolution within the context of organismal relationships. The Leebens-Mack laboratory uses phylogenomic approaches to explore the ecological, genetic and developmental processes that contribute to phenotypic diversification and speciation. They focus most of their attention on the evolution of reproductive characters in flowering plants. Much of the lab’s research involves phylogenetically based analyses and working with collaborators to develop new empirical and analytical tools to extend the use of phylogenetic methods in comparative genomics. These tools form the foundation for comparative studies aimed at testing the degree to which characterizations of gene function and regulatory networks in model systems are applicable to other plant species.

Abstract:
Sex chromosomes have evolved from autosomes hundreds of times across the tree of life yet the molecular and evolutionary processes underlying these transitions remain obscure. Garden asparagus (Asparagus officinalis L.), a dioecious species with a recently evolved homomorphic sex chromosome pair, is ideal for studying the earliest events in sex chromosome evolution. Phylogenomic and functional analyses of male and female asparagus genomes have implicated a 1 Mb male-specific region on the asparagus Y chromosome as responsible for sex determination in garden asparagus. We have identified two independent male-to-hermaphrodite mutants that implicate a single gene in this male-specific region as responsible for dominantly interrupting pistil development. Anther development is not affected in these mutants but male-to-female conversions are seen in two other mutants with deletions spanning the 1 Mb non-recombining sex determination region. This region contains seven gene models in addition to the female suppressor including defective in tapetal development and function 1 (TDF1). In support of the model proposed by Charlesworth & Charlesworth (The American Naturalist 1978) for the origin of sex chromosomes, these findings imply that the origin of a non-recombining sex-determining region on the Asparagus proto-Y chromosome involved the linkage of a male promoting gene with a dominant suppressor of female organ development. Phylogenomic analyses across dioecious Asparagus species suggest that whereas we have identified the ancestral female suppressor, the male function TDF1 gene was not fully sex-linked in their last common ancestor.

Dr. Leebens-Mack received his Ph.D. in Plant Systematics and Evolutionary Biology from the University of Texas in 1995.