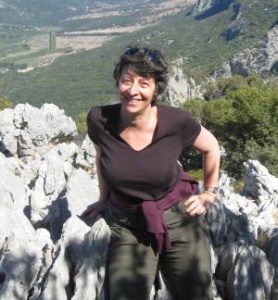 Dr. Anna Di Rienzo, professor from the Department of Human Genetics at the University of Chicago will be giving a talk on Monday, 02/26/2018 at 1:30 pm in the Stanley G. Stephens Room, 3503 Thomas Hall. This seminar is hosted by Fabio Morgante and the Genetics Graduate Student Association (GGSA).

Our group aims to characterize the amount and patterns of genetic variation in human populations and to elucidate the forces that shape and maintain this variation. Forces such as demographic change or population structure exert genome-wide effects, while others such as natural selection result in locus-specific effects. As greater attention is focused on dissecting the genetic bases of common diseases, an understanding of the patterns of human sequence variation is recognized as a critical step toward improved approaches to disease mapping. Our group takes advantage of the diverse intellectual environment at the University of Chicago to integrate the knowledge from population genetics and disease mapping studies.

Our work on these questions began with the analysis of mitochondrial DNA sequence and microsatellite variation and led us to propose that ancestral human populations experienced a major demographic expansion. More recently, we have been taking advantage of the proliferation of new genetic tools for population studies, to test increasingly complex and, thus, more realistic scenarios of population growth; for example, we can survey sequence variation and linkage disequilibrium in a number of independent regions of the human genome. Our survey includes ethnically diverse populations so that the effect of population structure on genetic variation may also be assessed. Our empirical work is complemented by extensive modeling of demography and population structure by computer simulations based on coalescent theory (in collaboration with R. R. Hudson – University of Chicago).

More recently, we are studying the evolution of a polymorphic variant contributing to type 2 diabetes susceptibility. This variant was identified in the laboratory of our collaborators, G. I. Bell and N. J. Cox (University of Chicago). An attractive hypothesis, called the “thrifty genotype” hypothesis, proposes that diabetes variants have evolved under the effect of positive natural selection. Because natural selection leaves a distinctive signature on the amount and pattern of sequence variation and linkage disequilibrium in the region linked to the selected site, we have designed a survey to detect this. It involves quantitative comparison of both sequence and haplotype variation, and the degree and pattern of inter-population differentiation, at this site versus that at neutrally evolving loci. In addition, we will investigate the degree and pattern of inter-population differentiation at this site and ask whether it differs from those observed at other neutrally evolving loci in the human genome.

We are also interested in pharmacogenetic polymorphisms. Drug metabolizing enzymes (DMEs) are particularly interesting subjects for evolutionary biologists, because of their role as mediators between the organism and the environment. Their function in the detoxification of xenobiotics implies that variability at these genes is under strong selective pressures and, because the chemical environment varies significantly with diet, climate, lifestyle, etc., a great deal of inter-ethnic differentiation is expected (and in fact observed) for DME polymorphisms. Carcinogens are also metabolized by DMEs; thus, variability in DME genes is likely to result in varying susceptibility to cancer. Our efforts in this area so far have concentrated on a common polymorphism in the promoter of the UGT1A1 gene which encodes the major bilirubin glucuronidation enzyme. This enzyme also detoxifies the active metabolite of a commonly-used anticancer agent (irinotecan). Based on a worldwide survey of variability at the UGT1A1 promoter, we detected extensive variability across the major ethnic groups which may underlie the variability of response to the anticancer agent. We are currently investigating whether UGT1A1 polymorphisms contribute to the susceptibility to different types of cancer and surveying sequence variation for evolutionary analyses. We anticipate that these studies will provide a better understanding of the role of glucuronidation in drug response and in the gene-by-environment interactions that underlie cancer susceptibility.